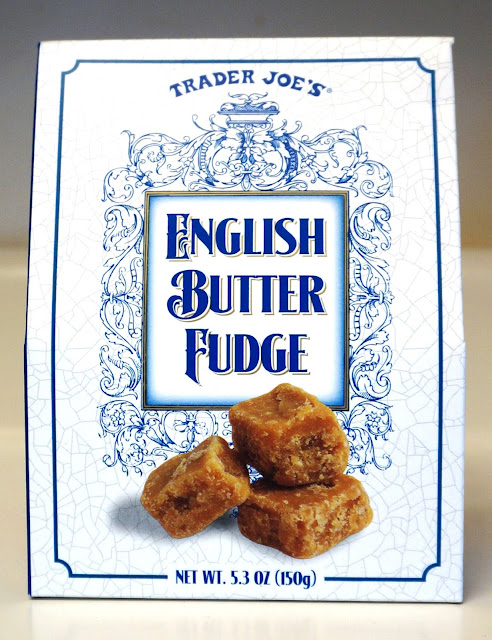 I saw this little package on the new-products shelf last week and didn't know what to expect of it, but bought it anyway.

The instant I bit into one, I had a powerful sensory memory, though it took me a minute to figure out what I was being reminded of: maple sugar candy, which I haven't had since I was a teenager. There's no maple here, but that soft, granular texture that quickly melts in your mouth--that's the same.

Really the only ingredients in this candy are butter and several different forms of sugar. Which means, of course, that it's wonderful. How could it not be?

Nina ate one. I had two. We both scoffed at the package's claim of a serving size of four pieces. Ridiculously high, we said. And then the next night, when I was alone, I ate four--and did so again the night after that. It no longer seemed ridiculous. In fact, I could have eaten more.

With each of my three (so far; there's four pieces left as I write this) samplings, I grew to love it more, and I am ready to add it to my Top Ten list.

Tough question. I will definitely be tempted to buy it again. But if I ever yield to the temptation, it's going to have to be a rare treat. I don't have to wear a suit often, but when I recently put on the only one I have, I nearly popped it open with straining to hold my expanding waistline. I had to have a tailor let it out. So things made of butter and sugar, no matter how wonderful, cannot be a regular feature in my diet. I could get away with that sort of indulgence when I was younger. But with middle age, and the classic middle-age spread, not so much.

Email ThisBlogThis!Share to TwitterShare to FacebookShare to Pinterest
Labels: candy