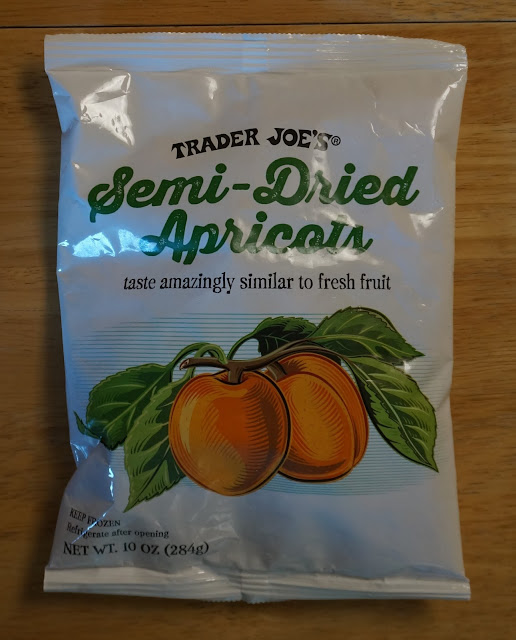 Yet another brand-new Trader Joe's product. The company's introduction to it is here. $3.99 per bag.

This is unlike any other fruit I've had before. Even the concept is kind of hard to grasp. The apricots are both dried and frozen.

Actually, even though they're dried, they're not at all dry. In fact, they go beyond being moist and can truly be said to be wet. After thawing, the only evidence that they have been dried is that the little wedges of apricot are clearly smaller than any fresh apricot would produce. TJ's claims that it takes about two pounds of apricots to produce each 10-ounce bag, implying that something like 50% of the weight (after you account for the pits and skin, which have been removed) has been dried out of them. That seems about right, given the size of the pieces.

They are tasty--sweet, with a real apricot taste (which I suppose shouldn't be surprising) and a nice texture. The hype is true for once: they really do taste and feel like eating fresh fruit, except for the size thing.

This just leads me to wonder why they need to be partially dried before freezing. Maybe apricots don't freeze well in their native state. That's kind of what is implied by the web site description: "Unlike other frozen fruit that hasn’t been semi-dried, our Apricots don’t exude any excess moisture—it’s been removed in the drying process."

I just thawed the whole bag in the refrigerator, rather than trying to thaw one serving at a time. I then ate them straight out of the bag. I didn't try using them to top cereal, or any of the other ways that they suggest.

Yes, at least once in a while. I still prefer frozen berries over these, but they're definitely good enough to revisit now and then.

Okay, let me count the ways:

2. Unsweet. Apricots should have a sunny, piercing sweetness. These had a nasty back-of-the-tongue musty bitterness. They tasted green, but not in a good way. Ugh.

3. Rubbery. The betwixt-and-between of neither fresh nor dried results in a rubbery texture. Rubbery is good for rubber and NOT MUCH ELSE ESPECIALLY FRUIT.

These abominations are consigned straight to Nina's Bottom Ten. Take my advice and AVOID.