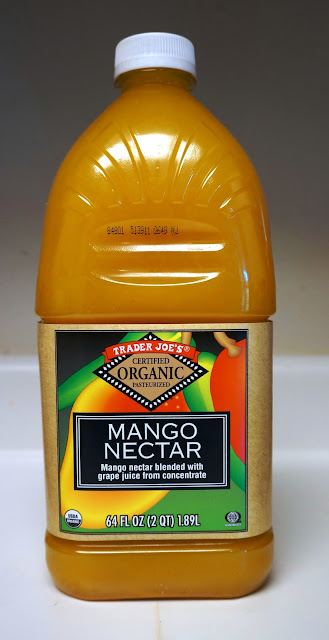 I loved apricot nectar when I was growing up--and I still do. When I noticed a jug labeled "mango nectar" on the Trader Joe's shelves, I hoped that it would be similar, except (obviously) with mango instead of apricot.

And it was! I like it! It is not another in the line of disappointing TJ's big-jug juices that we have reported on endlessly in these pages. Sure, I can taste that there is a large component of grape juice in there, if I stop to think about it. Yes, I know that even that wasn't enough sweetness for the TJ's crew and so they added plain old sugar, too. And it's true that such mucking around with the natural fruity goodness of juices usually calls forth Nina's memorably descriptive phrase of "melted lollipops." But for reasons I can't quite put my finger on, this one I like. To me it tastes lightly and appropriately sweetened, not sickeningly sweetened as several others in this lineup have been.

I suppose it's possible that I'm not evaluating it fairly and objectively, but am simply being fooled by its use of mango puree rather than juice, and its resultant textural similarity to apricot nectar, which calls up fond old memories. So take this review with a grain of salt. But if I'm temporarily abandoning objectivity for nostalgia, so be it. I don't feel like resetting my parameters of what I like right now.

Yes. I'm not as gaga over this as I am for some of TJ's wonderful pure juices, like grapefruit and pineapple. But I definitely like it enough to bring it home once in a while.
Posted by Rakewell at 9:00 AM