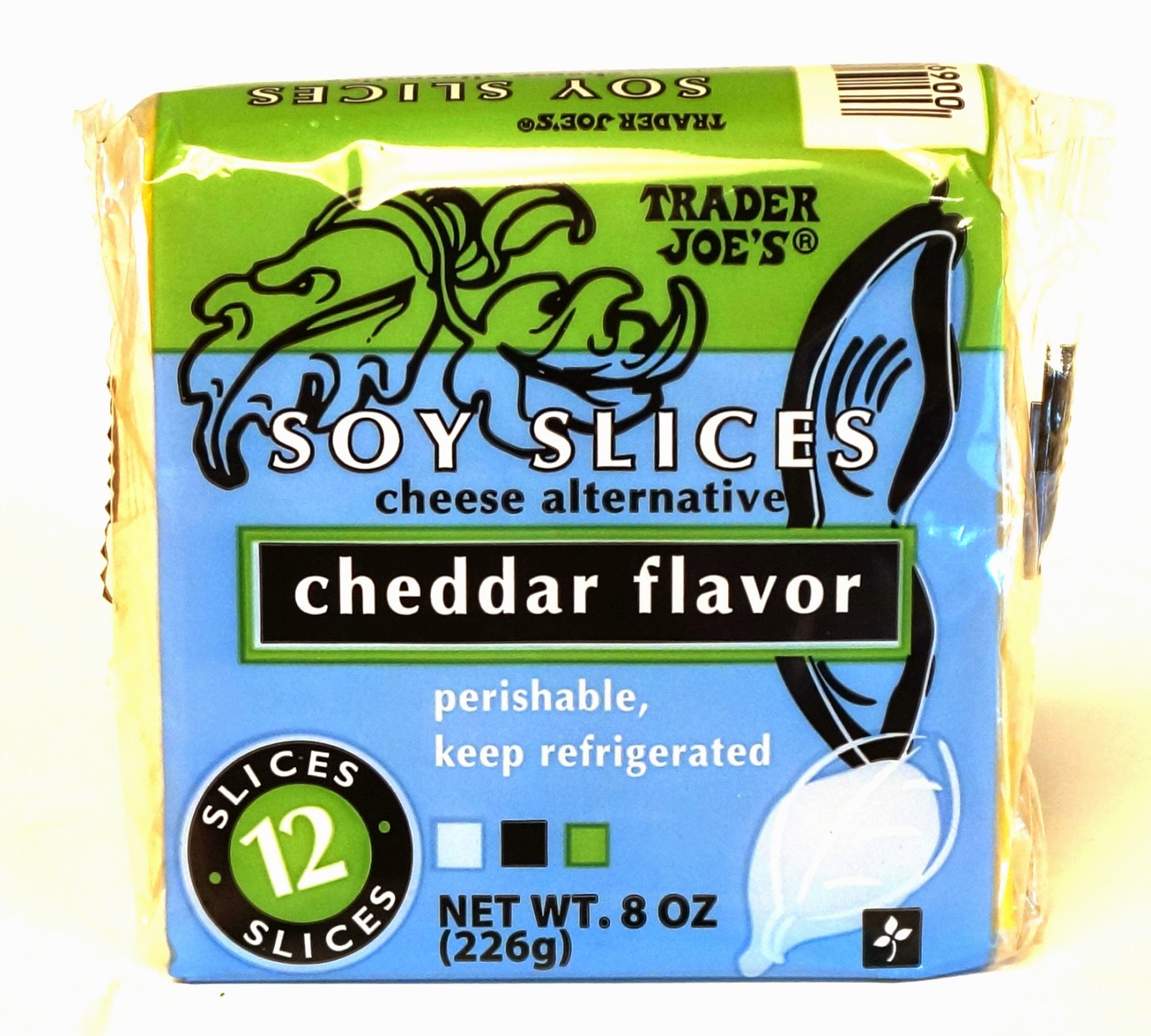 These are individually wrapped slices of a reasonably convincing fake cheese.

You'd naturally think that something that is marketed as a "cheese alternative" and made of soy would be a vegan-friendly product. You'd be wrong, at least as applied to this particular item. If you read the fine print on the back, you find that it's labeled "vegetarian" but not "vegan." The label further informs, "Contains: milk & soy." After "soy base," the next ingredient is "casein (milk protein)." There's your culprit right there.

That may explain why this is better than most of the purely vegan cheese substitutes I've tried. It does have that peculiar soy flavor, but it's muted. I notice it only if I pop a bit of the stuff in my mouth naked. Er--that is, the slice is naked, not me. Though I suppose it would taste the same whether or not I was wearing clothes. But the point is that the off-taste is easily masked. Certainly if you plop it on a burger, you're not going to think "soy" when the combination hits your tongue. Something as meek as a Ritz cracker was enough to hide the soyness for me.

But you have to wonder what the target market is for these slices. Vegans won't touch them, obviously. People who identify as vegetarian but not vegan have presumably already decided that they don't object to dairy products, so wouldn't they just buy real cheese slices?

The only niche I can think of that would be interested in this, as opposed to real cheese slices, is people who are so lactose-sensitive that they can't have even the 3/4 of an ounce of cheese that a regular slice would have. That's got to be an unsustainably narrow market.

Probably not. I originally bought it without reading the back of the package, and so assumed it was a completely non-dairy product. Nina is making serious efforts to reduce her use of milk and milk products, so I had hoped I could offer her this as a small piece of that change. But since it's derived from milk, it's hard to see that it furthers the cause. That being so, I can't think of any good reason to choose this over real cheese slices.

When I first started reducing my dairy intake, the disappearance of cheese was the most painful part of the process. I loooooove cheese and was accustomed to eating a lot of it. Naturally I bought and tried pretty much every cheese substitute available.

Pretty much all the ones that I thought were at all worth eating had dairy products in them. WTF?

The others are pretty much yucky.

The good news for me is that I no longer crave cheese as I once did. I still eat it from time to time in restaurants and at other people's homes, but it has become a much smaller percentage of my diet.
Posted by Rakewell at 9:00 AM