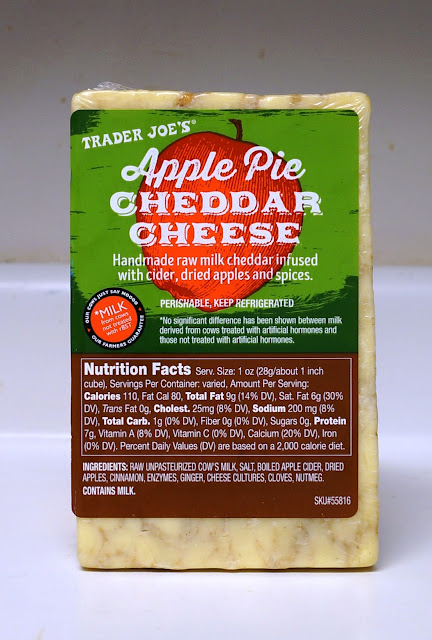 This is Day Six of New Products Week.


One of the first of Isaac Asimov's stories in the "I, Robot" collection is about a robot on Mercury (if I recall correctly) which ends up torn between obeying the second law of robotics and the third law. As a result, it ends up venturing toward a danger zone as it has been ordered to do, but then backing away again for self-protection, in an endlessly repeating cycle.

The mental image I formed when first reading that story something like 40 years ago came back into my mind as I felt torn while standing in front of this product at the store. I reached for it, then pulled my hand back. Reached again, stopped again.

I love apple pie, and I love cheddar cheese, so I was intrigued to try this mashup. Hence the reaching. But the second-guessing happened because when I tried to imagine what cheese with apple pie ingredients in it would actually taste like, well, it seemed kind of repulsive. Hence the pulling back.

I finally did buy it, obviously.

Which of my impulses was correct? The one about it being repulsive.

I ate several slices of it on each of three different kinds of crackers, and I didn't think any of them worked right. The problem, I think, lies somewhere in the cinnamon/cloves/nutmeg portion of the program. It just doesn't sit right with the cheddar cheese.

I ate about 1/4 of the block, trying to learn to appreciate it, and just couldn't. The rest is going back for a refund.