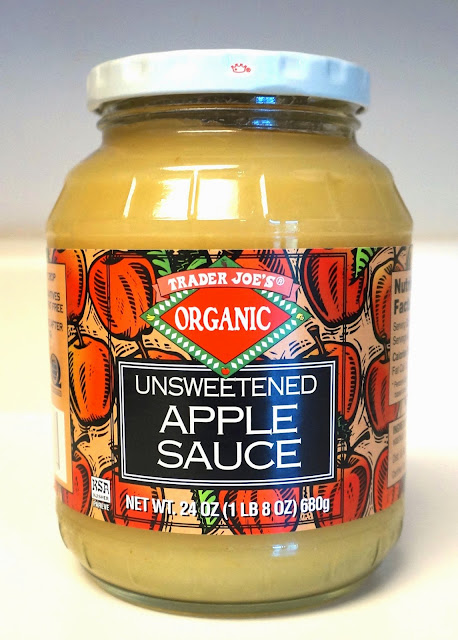 This is the third Trader Joe's unsweetened applesauce we've reviewed here. We've previously covered the regular (i.e., non-organic) version and the Gravenstein version. Tonight I arranged for us (Nina and me) to taste all three side by side. It was eye-opening.

We agreed straightaway that there is absolutely no reason anybody should ever buy the regular version, even though it's the cheapest. I now think that my first review of it was overly generous. Compared to the other two, it's thin, watery (literally--you can see the water seep out from the edges as it sits in the bowl), and lifeless.

My experience generally has been that the organic and non-organic versions of a product are basically indistinguishable. You're not paying for higher quality, but for whatever peace of mind you derive from having reduced the use of pesticides, herbicides, antibiotics, and GMO ingredients in the your diet and in the world.

The pair of this and TJ's regular unsweetened applesauce is a radical departure from that experience. These could not possibly have the same supplier; they are utterly different products. The organic one is sweet, flavorful, thick, delicious. It puts the other to shame.

It costs 20 cents more than the Gravenstein, our previous favorite. How does it stack up? Pretty well. I like it a little bit less, but only a little. It's quite a bit sweeter, a little less complex, definitely less distinctive. But it's really good, and only misses being the best applesauce I've ever bought by comparison to the one-notch-better Gravenstein.

Probably not as long as the Gravenstein is available. But if the Gravenstein were to disappear from TJ's shelves, I would feel it only a small sacrifice to have to resort to this stuff as my second choice.
Posted by Rakewell at 9:00 AM