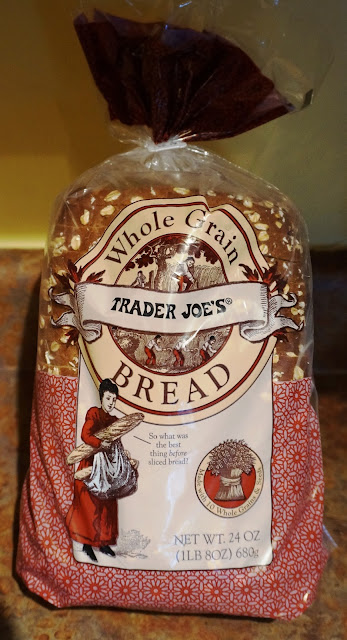 The wide variety of Trader Joe's breads makes it hard to keep track of them. They make it even harder by using very similar product names. In this instance, they also complicated the task by duplicating the label decoration. That woman saying, "So what was the best thing before sliced bread?" also appears on the wrapper of Trader Joe's Multigrain Bread. I had to scroll through my old posts three times to be sure this was an item I had not reviewed before.

It's pretty good. I liked both its flavor and texture. It worked well both toasted with just butter, and untoasted in sandwiches.

But like so many other TJ's breads, it had a fatal flaw that will keep me from repeat purchases. This time, it's not a shortcoming in the two main dimensions of the slices (a recurring problem in TJ's breads--see here, for instance), but the third dimension; the flaw is how thinly sliced it is. I didn't whip out a ruler to measure, but the slices felt at least a third thinner than I expect. It seriously felt like something was missing, like I was being shortchanged. With either honey or jelly on a peanut butter sandwich, the condiment quickly soaked through.

Email ThisBlogThis!Share to TwitterShare to FacebookShare to Pinterest
Labels: bread