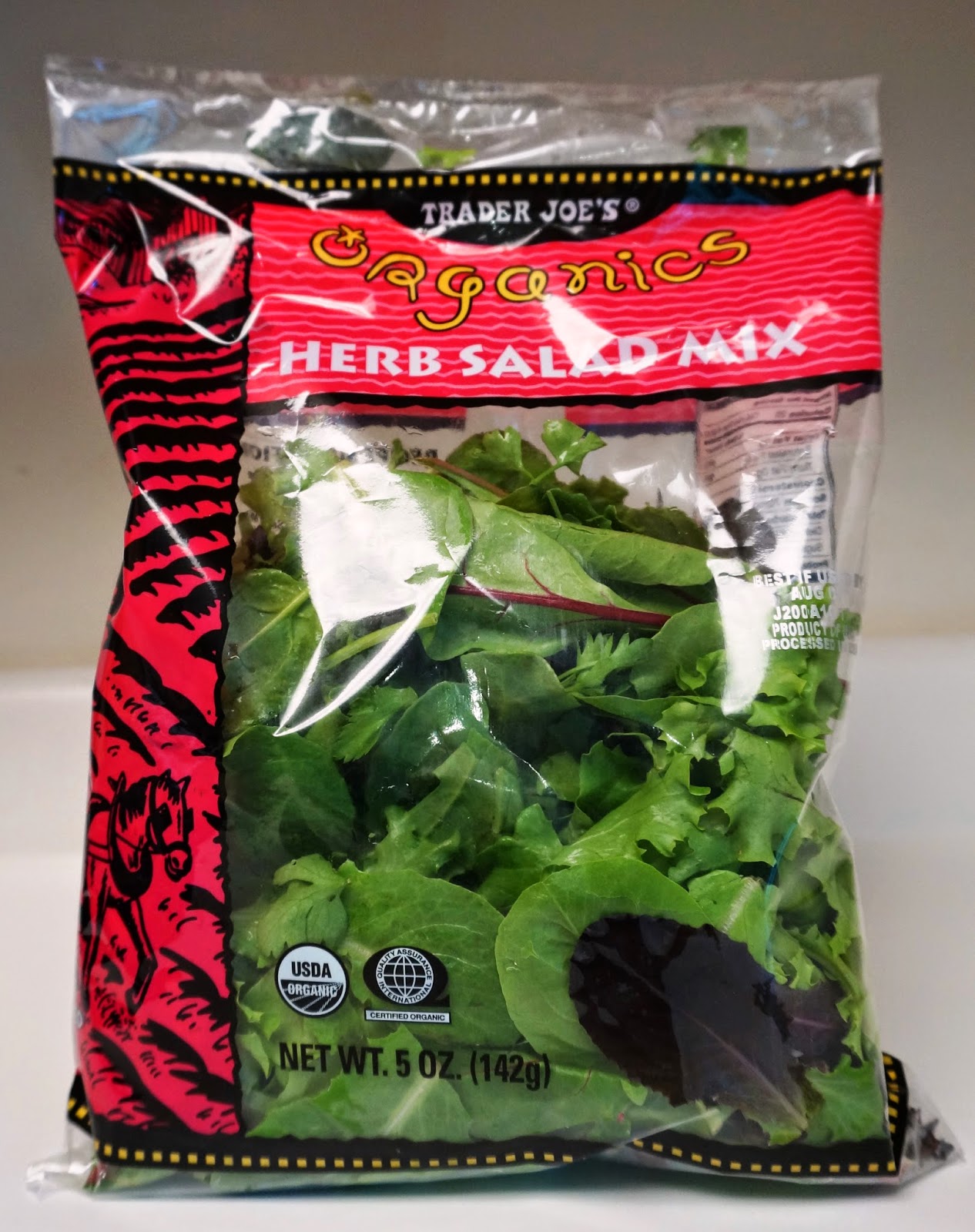 We're coming close to the end of the products that made up our nearly-all-Trader-Joe's dinner recently.

The salad was the stuff pictured above. A couple of months ago, I had noticed in the produce section of another local grocery store something called "Herb Blend" from Earthbound Farm. I decided to try it instead of the more conventional packaged salads I usually get. Nina and I both liked it. The dill and cilantro add some zip and an appealing aromatic quality.

So last week when I spotted in TJ's this "Herb Salad Mix," I thought it would be similar. In fact, if you look at the ingredients list, it so closely matches that of the Earthbound product that it's easy to suspect that Earthbound is TJ's supplier, and it's the same blend in a different package. It consists of a mix of baby lettuces (romaine, oak leaf, red leaf, lollo rosa, tango), baby spinach, red and green chard, mizuna, arugula, frisee, radicchio, parsley, cilantro, and dill.

But it doesn't taste or even smell the same. Now, this could easily be package-to-package variance. Obviously this isn't an industrial assembly-line product that can be made identically day after day. But at least this one package of salad was a disappointment. It lacked the qualities that made the Earthbound interesting. Overall it had an unfortunate resemblance to lawn clippings.

Yes. I'll try it again because it ought to be good, and I'm willing to give TJ's the benefit of the doubt that I just got a below-average sample.

I wrote the above about a week ago. Today I tried a second bag of the same stuff. What an incredible difference! It's really hard to believe it's the same product. It was much fresher. I could smell the lovely aroma of the herbs literally the second I cut the top off the bag. There was a lot more dill and cilantro, or at least it was a lot more noticeable. I thought it was a lovely blend, virtually perfect. It was every bit as good as the Earthbound product, and maybe even better. In fact, it was so good that if it keeps on this way (i.e., I don't keep getting dud bags like the first one), this will become my default go-to packaged salad.