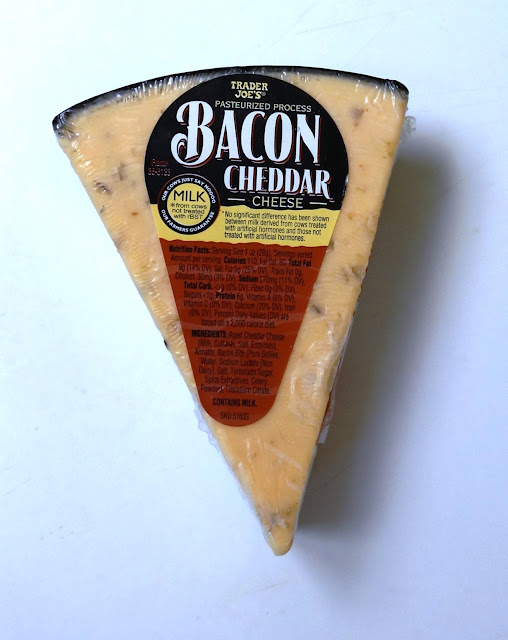 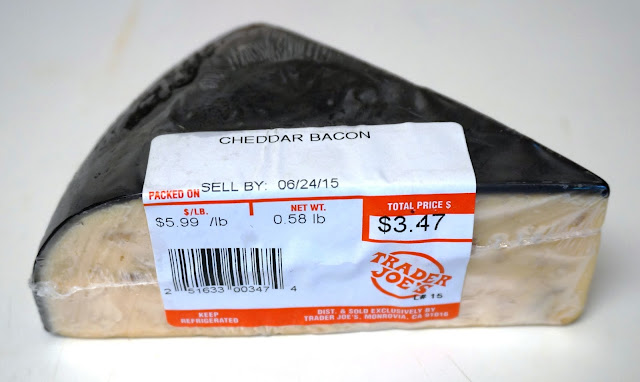 The block of cheese you see above is not the one I ate. The first one I brought home got moldy within about four days, before I had even opened it. So I took it back to the store, got a refund, and bought a new chunk. As always with Trader Joe's, the return process was easy and without fuss.

I liked this cheese. It's mild, flavorful, slices easily, and tastes great on a variety of crackers I had with it. Cheese with embedded bacon bits is a crazy idea, but it works here. There's just enough bacon to taste and enjoy it, without overpowering the cheese. I think it's probably about the perfect blend ratio.

After that description, you'd probably expect a yes. And it would be, if enjoyment were the only criterion. But bacon is one of those foods that, though I love, I've been cutting out of my diet almost entirely, due mostly to consideration of the animal source, and slightly to consideration of the health effects. I've lived in Asheville 3 1/2 years as I'm writing this. During that time, I've never bought a package of bacon. I've had it with breakfast at restaurants three times, I think. I did buy this cheese, and the unusual Bacon Ganache chocolate bar--but that's it. I suppose that amounts to something like a 90% reduction in my bacon consumption from some years before.

On the rare occasions that I decide to indulge, I want the straight stuff. For items like this, I'm confident that a bacon-flavored, soy-protein-based product would work very nearly as well. If TJ's sold such a thing, I'd buy it.
Posted by Rakewell at 9:00 AM