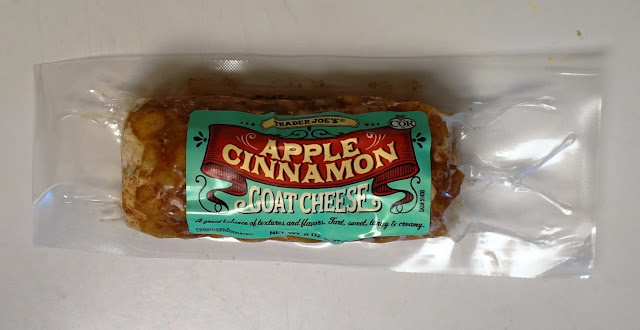 The answer: Not so much.

As you can see from the photo, this extremely unusual cheese has big chunks of apple coated all over the outside of the cheese. The apple chunks are cooked to softness and held together with some sort of sweet, sticky, cinnamon sauce.

There are mechanical problems: It's hard to slice the cheese because of the chunks of apple getting in the way, so you end up knocking them off, which defeats the purposes. You have to either use really large crackers (Some Enchanted Crackers are big enough), or cut the slices into quarters. The whole thing is kind of a sticky mess.

Then there are taste problems: The cinnamon-apple combination is so sweet and strong that the underlying cheese is completely overwhelmed. It's the same problem I had with the cinnamon-Toscano cheese, except made even worse by the additional presence of the apples and their sweet binding sauce.

It's definitely interesting and different from any other cheese I've had before. If you're at a party over the holidays and the host has a cheese sampling tray where this is one of the options, by all means give it a try, because there's probably nothing else like it anywhere. But after curiosity is satisfied, I don't think this is worth having.