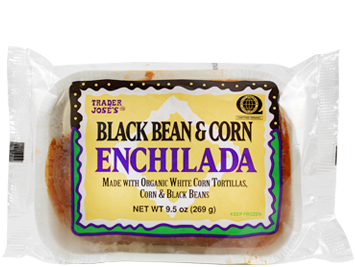 This is a brand-new item; see Trader Joe's introduction to it here. I swiped the photo from TJ's, too, because I picked this up on my way to Nina's for lunch, and forgot to take a picture of it before we cooked and ate it.

I'm not sure why this isn't given TJ's usual "V" vegan symbol. Looking over the list of ingredients, I see no non-vegan elements. It is certified organic, however, as indicated by the seal in the upper right corner.

I was a little worried about trying this, after noting the presence of both tofu and onions. But I was pleasantly surprised that they did not play a prominent role.

With neither meat nor cheese, this didn't seem quite like other enchiladas I've had before, but it was OK. It's mildly spiced, but seems to have tiptoed past the Trader Joe's Blandification Committee without too much damage. It needed more microwave heating than the package suggested, but that was a minor inconvenience.

Probably not--mainly because I'd really prefer to have some cheese and/or meat (fake would be fine for this usage), rather than all veggies. But I didn't dislike it, and if Nina served it to me for dinner someday, I'd eat it contentedly.

My views on frozen burritos and enchiladas and the like have been expressed before. Most of these things are easy enough to throw together that I'm almost never buying them frozen and prepared.

I'd be prepared to make an exception for these. I added a soupçon of Rooster Sauce (sriracha) to the sauce and that, I thought, made them just right. The sauce has a bit of astringent piquancy (probably the citric acid), which I particularly like. If you hadn't told me that it was tofu in there, I could easily have mistaken it for potato.

I might be tempted to put one these babies in the back of the fridge for an I'M STARVING FEED ME IMMEDIATELY emergency.

In short, not bad. Not bad at all.