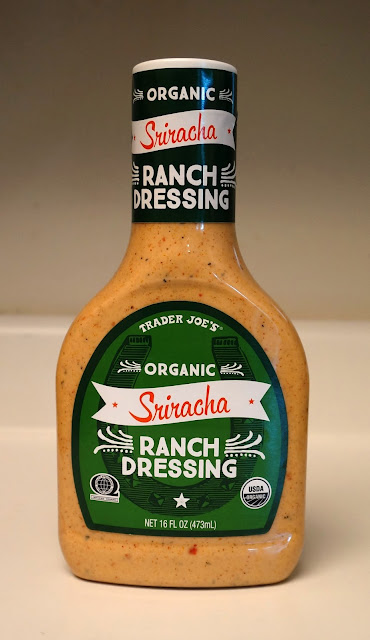 Trader Joe's own description of this brand-new product is here.

I had read the "Eating at Joe's" review of this dressing before trying it, so I was, fortunately, forewarned that "if you want to slather it on a bed of lettuce and carrots, you had better be ready for your lips to blaze with the fire of a thousand raging suns." I therefore was much more sparing in its application than I normally would have been--and issued the same warning to Nina.

But it was still way too hot. I think sriracha ranch dressing is a great idea, but with a little sriracha to liven it up, not so much that it turns eating a salad into a freakish medieval trial by ordeal.

Where, I ask, is the Trader Joe's Blandification Committee when you need it??? (That was Nina's line. I told her I was going to steal it, and I'm a man who keeps my promises.)

Look, it's not that this stuff is so hot that you physically can't eat it, but it is so hot that you taste nothing but the heat, and therefore won't want to eat it. Sure, that looks like lettuce you have it on, but it might as well be green pasteboard, because they would both equally lose any chance at having their flavors get through to your taste buds. Put another way, if you're going to have this salad dressing, you might as well skip the salad and just chug some from the bottle, because you're never going to taste the salad anyway.

Frankly, for me that makes this functionally inedible. It goes onto my Bottom Ten list, and the bottle goes back to the store for a refund.

If they were to reformulate it with maybe 1/10 the sriracha--maybe even as much as 1/4--yes. Otherwise, no.

Whenever anyone reviews a product by saying something along the lines of “Oooo too hot, lips burning, thousand suns, ouch ouch ouch!” I think to myself: WUSS! So I was prepared to enjoy this so-called sriracha ranch with gusto.

It’s just hot and more hot and no flavor. It’s obviously not made with delicious rooster sauce, because if it were, it would be TASTY, whereas, as mentioned, this is just HOT.

Bob has it exactly right: might as well be eating shredded tax bills instead of salad. And any ranchiness there might once have been in the dressing is long since overrun by the HOT.

Away with you, useless sauce.