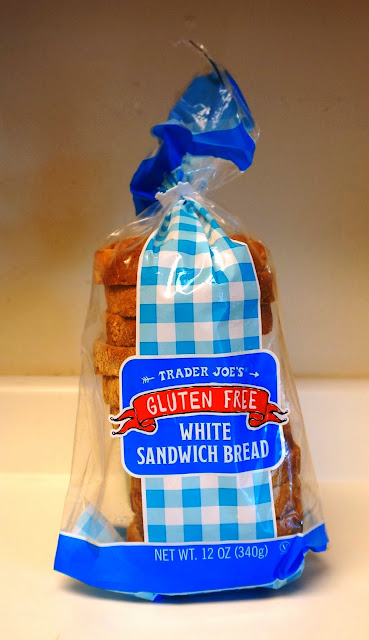 We're doing an entire week of review of Trader Joe's gluten-free products, and we're up to Day 3:

I don't need gluten-free products for any medical reason, nor do I think they're somehow generally more healthful than their regular counterparts. Heck, some of my favorite meat substitutes are made from seitan, which is basically just wheat gluten.

So why did I buy this bread? Just on impulse. I was curious to see if it would be a major loss if, for some reason, I had to switch to gluten-free products. (My mother had celiac disease, so that possibility comes to mind occasionally.)

And ya know what? It's not half bad. If I had been served this bread without knowing what was different about it, I don't think I would have guessed "gluten-free." It wasn't quite as good as typical white bread, and a far sight from the best of them. But toasted with either butter or jam, and in sandwiches, I was easily able to forget that it was "special" bread.

The strangest thing about it is the size of the slices. They're only about 2/3 of the width and length of standard sandwich bread slices. I don't know why they did this, unless it's some intrinsic limitation of the recipe. For toast this was not much of a problem, as I could just use three instead of my usual two. Sandwiches, however, were disappointingly small.

No, not unless I have a houseguest who needs gluten-free stuff. But I'm not sorry I tried it.