This is the last of the three varieties of TJ's expensive ($4.99 a bottle) line of "cold pressed juice." (Reviews of the other two have been posted previously--yellow here and green here.) 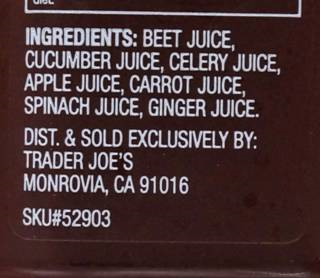 Frankly, I found it hard to taste anything other than the beet juice. I specifically strained to see if I could detect cucumber, apple, or carrot, but failed. I tolerate beets, but I don't love them. Predictably, then, I would say the same for this juice.

This grew on me as I drank it, and not in a tendrils-sprouting-from-under-my-fingernails kind of way. I could definitely taste some of the other flavors, predominantly the celery and ginger. The main thing I like about this and the yellow juice is that they are light and refreshing and not too sweet. (The apple juice is in the mix entirely for sweetness.)